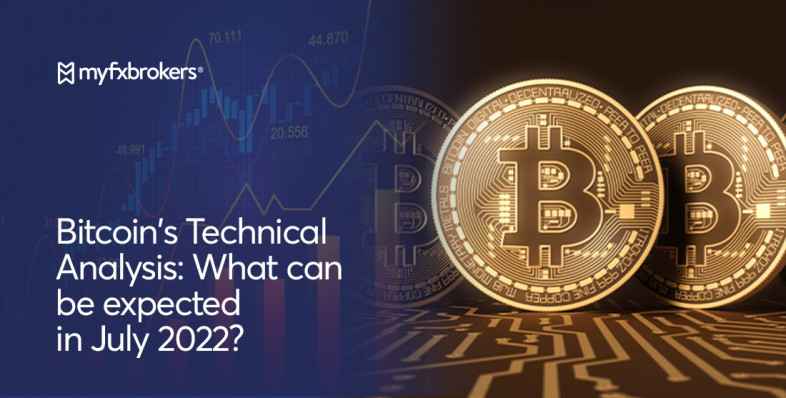 Bitcoin's Technical Analysis: What can be expected in July 2022?

Key highlights leading up to the expectations:

In 2021, institutional investors saw Bitcoin (BTC) to be an intriguing investment possibility. It's attractive to want a dependable, long-term store of value.

Bitcoin or BTC, unlike conventional money, has a finite quantity. Bitcoin was designed as an electronic peer-to-peer currency system. It differs from any government-issued fiat currency, including the US dollar or the Euro. Decentralisation enables users to communicate payments to one another without the need of middlemen.

According to CoinMarketCap, BTC is the biggest cryptocurrency at the moment of typing. The market capitalization is at about $678.9 billion. Rather than financial institutions, Bitcoin provides consumers power over financial stability. It is an asset that has encouraged the creation of hundreds of other cryptocurrencies. It has become one of the most popular investment alternatives due to its outperformance of other asset classes over the preceding decade. What does BTC have in store for everyone in July 2022? Let's gain a deeper insight!

The logarithmic chart provides a more accurate long-term perspective. The monthly time period shows that the trend is in favour of the bulls. BTC is now undergoing substantial support testing. The buildings on the left provide hints. As you can see, this is a significant degree of support for BTC. Last time, BTC sat on the level for around three months.

A closure below $35,000 is a critical psychological milestone, and closing below it may force the price to continue making lower lows. If the bulls want to preserve the bullish channel formation, they need to crank it up a notch. There has been no indication of direction.

A similar formation was seen in 2020, when BTC established a bullish channel. In today's price action, we are searching for confirmation of the support. There any bullish indicators on the shorter time frames.

Keeping with the logarithmic chart, a pattern is discovered in the weekly time period. The price is building short-term support, as can be seen.

When the price was at this level previously, there was a war between the bulls and bears. This time, expect a similar situation to play out. Let's go through some additional specifics.

Let's look at the first black circle and compare it to the price activity today!  Price penetrated the support zone numerous times the previous time it was at this level before beginning a fresh move. This time, we're hovering just over the support zone. While there is no verification of the future move, we are seeing early indicators of bull reclaiming control.

Let's utilise the logarithmic chart again, but this time on a daily basis! This time period helps us determine when to draw the trigger. We get a better idea of the channel that is respected here. The price has just dropped as low as $32,900. In the medium term, the bears will maintain control until support is confirmed. If BTC closes above the region of interest, the price will likely continue to rise towards the midline. Nevertheless, whether this level is rejected, the price will likely return to resistance.

What to do now?

The best low estimate is still $13000, with the 'low' being the level that remains after the fall has reached its ultimate bottom. Here are the reasons given. It might spike much lower, but the crucial signal is that if this range indicated below is broken, it will travel a long distance in that path:

It's a short-range, so either way you'll get a clear signal.

If it starts to break down, we're looking at $10000. As a bear, breakout upward is possible, albeit such a move would be a good hint for a run above $30,000. Nevertheless, I'm not sure if that would be a dead cat bounce or a hint that the bottom has been reached. As a result, I wouldn't want to start investing again. It will take a huge amount to break the current bear tendency, and it will certainly take a long time, so a tear through an area is not definite as a sign that the unfortunate thing is over.

According to the road map below and the earlier prognosis in January, the more time passes and/or the market pace decreases, the more this paradigm will degrade.

The starting point is approximately $13-$14000, but the ultimate capitulation might be much lower. That's because most collapses conclude in a point where the bottom is untradeable; the real low' is where the majority of the market can enter, and it's usually quite a bit higher. One absolutely never expects to be present when the market collapses and provides incredibly low pricing for a little period of time. Even whether you are present, your platform may be damaged and unreachable. That applies to highs as well, but I am sure many have experienced the difficulty of quick markets disrupting their ability to enter or exit. That will undoubtedly be the case with Bitcoin's bottom.

If you believe in cryptocurrency, that isn't the time to be concerned. Bitcoin will be much higher in three years. If you're wondering when to buy, the answer is little and frequently, whenever you believe it's safe. Good luck if you want to try to go to the bottom. However, if this new range is breached, one will try to re-enter once the activity has finished. That last leg should be followed by a period of sideways trading, which will break the bear trend and provide an opportunity to average in.

We will reach the bottom during the year, and there will be plenty of chances to crawl slowly up. Experts were planning to buy in now, even with such a clear range to guide us, they are going to let the market tell where it's going instead of guessing.

Lastly, utilising the logarithmic chart to observe BTC supremacy. The price has rebounded from the key support. The Bitcoin domination (BTCD) grew by 40% the previous time the price was at this level. Expect investors to return to BTC if BTCD rises. During times of uncertainty, investors go toward what is more stable. BTC is that rock in the cryptocurrency universe. Stability is anticipated to follow as it gains exposure. Institutions will gradually accept and accept BTC as a payment mechanism.

For the time being, BTC supremacy is at an all-time high.

The monthly time period of BTC reveals that the trend is bullish. On the weekly time frame, BTC offers no confirmation of the next direction. The daily time frame of BTC indicates that the bulls have found a short-term support level. The domination of Bitcoin is gaining traction.