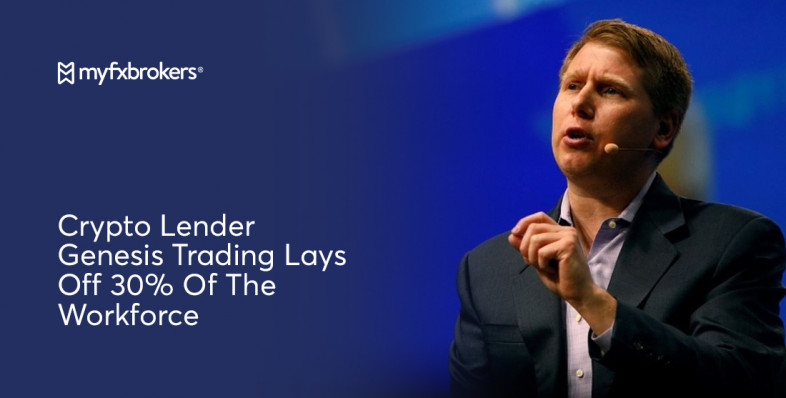 Crypto Lender Genesis Trading Lays Off 30% Of The Workforce

The bitcoin price is plummeting at the start of the US day as US Consumer Price Index inflation surpassed experts' expectations. Bitcoin is down 4.1% at $21,404 following a strong run, but it is still up 13% in the last seven days.

According to a person familiar with the situation, Genesis Trading, the troubled crypto lending arm of Barry Silbert's Digital Currency Group, has reduced employment by 30% as it confronts increased pressure from creditors and the approaching danger of bankruptcy.

Genesis has previously cut off 20% of its personnel and removed its CEO last year. Silbert's crypto conglomerate, which includes the Grayscale Bitcoin Trust (GBTC) and mining business Foundry, has been impacted by the 2022 market turmoil and the bankruptcy of crypto hedge fund Three Arrows Capital.

According to the source, who wanted not to be identified since the data are classified, about 60 positions were removed. The firm today employs around 145 people. The latest cut comes only one day after Genesis interim CEO Derar Islim informed clients that the company needed additional time to resolve its financial issue.

The Wall Street Journal first reported on the layoffs.

Genesis hired bankruptcy attorneys immediately after the demise of cryptocurrency exchange FTX and its sibling hedge fund Alameda Research. According to the Wall Street Journal, Genesis sought a $1 billion emergency loan immediately after the collapse of Alameda, a big Genesis client. Genesis halted redemptions for all clients after FTX declared bankruptcy on November 11.

As a result of the redemption freeze, Silbert has come under pressure. Cameron Winklevoss, a Genesis client and CEO of cryptocurrency exchange Gemini, accused Silbert of "bad faith" stalling tactics earlier this week and demanded a solution to Genesis' liquidity situation. He stated that DCG owes Gemini customers and other Genesis debtors $1.675 billion.

On Twitter, Silbert stated that DCG never borrowed $1.675 billion from Genesis and is "current on all debts outstanding."

Do you want to see it in more articles? Genesis Trading, a cryptocurrency broker and lender, has cut off 30% of its workforce as the company suffers following many failures in 2022, according to a story published by the Wall Street Journal on Thursday afternoon. In August 2022, the firm already announced a 20% reduction in its 260-person employment.

Is Genesis Trading on the verge of bankruptcy?

According to a person familiar with the situation, Genesis Trading, the troubled crypto lending arm of Barry Silbert's Digital Currency Group, has reduced employment by 30% as it confronts increased pressure from creditors and the approaching danger of bankruptcy. Genesis has previously cut off 20% of its personnel and removed its CEO last year.

To begin, authenticated information is kept as blocks in the architecture of Blockchain technology, and each block is connected together to form a chain, hence the term Blockchain.

As a result, each time a transaction or activity is completed and confirmed, a block is formed reflecting that information, which can be read at any time but cannot be modified unless the 51% attack technique is used.

The produced blocks are piled on top of one another, linking the most recent block to previously formed blocks and sharing information. Dr. Graham Coop of the University of California, Davis, provides a moderate illustration of the link each individual has by carrying DNA from eleven generations back.

Curiously, the Genesis Block is the first block generated in each Blockchain ecosystem, much as Adam is the first individual on Earth. Every descendent of the decentralised system, including Bitcoin, has its own.

The inclusion of a Genesis Block, with its strong cryptographic relationship to all other blocks that will be mined, demonstrates how safe and immutable Blockchain technology was intended to be. Satoshi built the Bitcoin Genesis Block on January 3, 2009.

It appears weird, doesn't it? Remember that the Bitcoin timestamp is roughly 10 minutes. So, what's the deal with the 8,000-minute delay?

Up to this point, there have been several theories as to what occurred. The first is that Satoshi spent those six days mining the Genesis Block, ensuring that it was reliable and safe before backdating it to January 3rd.

Another school of thought holds that it was a reenactment of the creation myth from the Holy Bible, in which God created everything in six days before resting. We can't tell which one is correct just now. If the genius was present, perhaps the reason for the delay would be revealed.

Who Is Going To Spend The First 50 BTC?

Another intriguing aspect of the Genesis Block is that it was tied to 50BTCs (nearly $2.4 million in today's worth). Something fascinating about those BTCs is that they are not tied to any transaction on the Bitcoin network.

It was not exchanged or spent in the same way that many other BTCs are now. Using the link to discover it will result in an error message since the Bitcoin system as a whole cannot find any transaction associated with the 50BTCs. Then the issue arises: What must have compelled Satoshi to allow 50BTCs to flow in that direction?

Did there exist a mathematical formula that required 50BTCs to be connected to any blockchain platform's Genesis Block? It's difficult to discover a copy of the abandoned 50BTCs in other Genesis Blocks, like in the case of Bitcoin.

Some people in the crypto world, it appears to be an error committed by Satoshi, which may be true, but such an error will not be as precise and obvious when examining the sort of labour put into making Bitcoin successful.

Another possibility is that it was intended to serve as a basis for every other transaction that would ever occur in the system. Most new coins go through burning to enhance the foundation of their platform.

To this day, some Bitcoin supporters contribute bitcoins to that address for various reasons. (How would you react if Satoshi provided you with a link to those royalties?) As a result, the Genesis Block includes 50BTC that can neither be spent nor accessed. What are your thoughts?

Is there a reason why the crypto market is crashing today? Ethereum and Bitcoin are worth half of what they were at their peak

This follows US Treasury Secretary Janet Yellen's harsh crypto warning. On Sunday, the price of Bitcoin fell to roughly USD 27,000, its lowest level since late 2020, while Ethereum fell below USD 1,500 per ether.

Why Is Cryptocurrency Falling Today?

Almost all cryptocurrencies, including Bitcoin, are currently worth half or less of their all-time highs. The immediate cause of this crypto crisis appears to be a major sell-off by investors in response to rising inflation worries. Investors are also continuing to avoid riskier assets, which is reflected in the stock markets. Countries all throughout the world continue to report high inflation rates.

Following a similar move last month, the Federal Reserve is anticipated to boost its interest rate to 1.25%-1.50% this week. Data released on Friday indicated that prices in the United States climbed more than predicted in May, jumping to 8.6% after falling in April. Rising energy and food prices are driving inflation to its highest level since 1981.

Well over the weekend, there was also an ongoing sell-off, with BTC trading at USD 27,000. According to experts, the crypto price drop indicates investors' declining risk appetite. They certainly avoid riskier assets. With all of its risks and volatility, crypto is regarded as one of the most volatile financial tools.

According to some experts, rising food, gas, and energy costs are placing significant pressure on the cryptocurrency market, as Bitcoin and Ether have seen double-digit losses in the last 24 hours. "Financial markets throughout the world have suffered a dramatic decline after the consumer price index revealed the biggest inflation since 1981," said Shivam Thakral, CEO of BuyUcoin, as quoted by Financial Express.