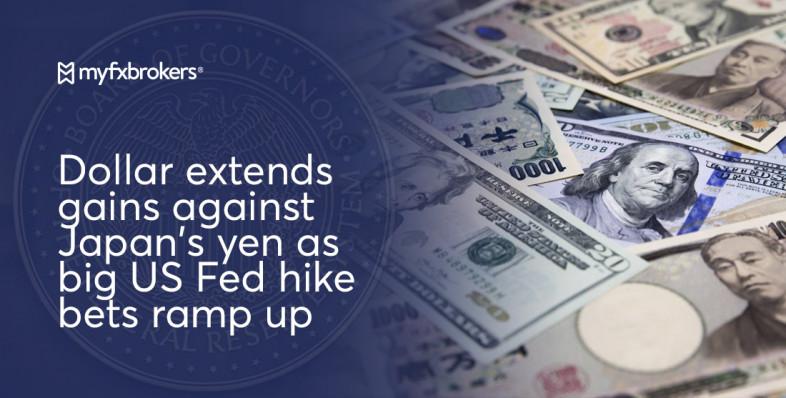 The dollar was recently 0.31 percent higher at 135.42 yen, having previously risen to 135.585 yen, its highest level since July 28, after gaining 1.57 percent in the previous session, its most significant single-day gain since June 17.

On Monday, the dollar continued its most muscular recovery versus the yen since mid-June. It was boosted by higher Treasury rates following a surge in U.S. employment growth that raised hopes for more aggressive Federal Reserve policy tightening.

The dollar was recently 0.31 percent higher at 135.42 yen, having previously risen to 135.585 yen, its highest level since July 28, after gaining 1.57 percent in the previous session, its most significant single-day gain since June 17.

The dollar index, which measures the currency against six counterparts, was at 106.77, down from a high of 106.93 on Friday, which was also the highest since July 28.

Traders now expect a 73.5 percent chance that the Fed will maintain its pace of 75 basis-point interest-rate hikes for its next policy meeting on September 21, up from approximately 41 percent before Friday's shockingly strong payrolls report stoked concerns that wage growth would feed inflationary pressures.

This week's emphasis will be on the U.S. consumer price index, which is coming on Wednesday, and if it can solidify the prospects of massive rate hikes. According to Reuters surveyed analysts, annual inflation would fall to 8.7 percent in July from 9.1 percent earlier.

"It will likely need a figure below 8.4 percent to establish the chances of a 50bp rise in September as the default setting," Pepperstone's chief of research, Chris Weston wrote in a note.

"I wouldn't want to be short USDs if the CPI print is higher than 9%."

The two-year Treasury yield remained elevated in Tokyo trade on Monday, at 3.2628 percent, after touching 3.3310 percent at the end of last week, a level not seen since mid-June.

The negative gap between two-year and 10-year rates was 42 basis points, having reached 45 basis points on Friday, the highest level since August 2000. An inverted yield curve is frequently seen as a sign of impending recession.

The British pound fell as low as $1.2004 on Friday, a day after the Bank of England raised interest rates by half a percent, as predicted, but also warning of a prolonged decline.