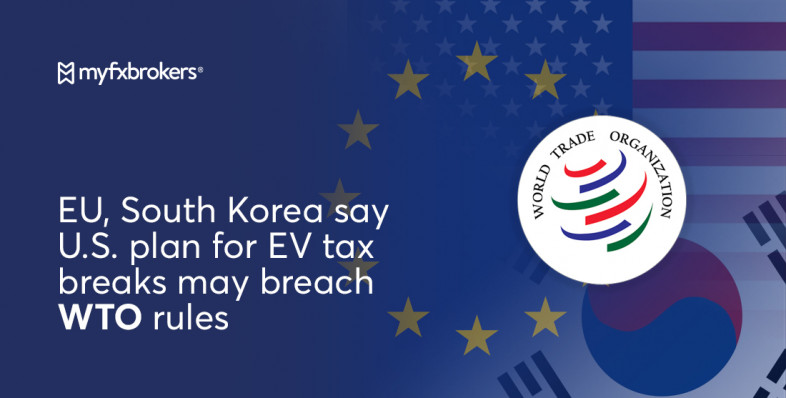 The European Union and South Korea have expressed worry over planned US tax incentives for electric car sales, claiming that they might discriminate against foreign-made vehicles and violate World Trade Organization (WTO) standards.

Congress would increase the ceiling on the existing $7,500 tax credit for electric car purchases under the $430 billion climate and energy measure voted by the United States Senate on Sunday but set conditions, including prohibiting vehicles not built in North America from obtaining the credit.

The limit on tax incentives for automobiles built outside of North America would go into effect as soon as President Joe Biden approves the bill.

"We believe it is unfair because it favours foreign manufacturers over US producers," said European Commission spokesman Miriam Garcia Ferrer. "Of course, this would make it incompatible with the WTO."

Garcia Ferrer stated at a press conference that the EU agreed with Washington that tax credits are a vital incentive to stimulate demand for EVs, encourage the transition to sustainable transportation, and reduce greenhouse gas emissions.

"However, we must guarantee that the measures implemented are fair and... non-discriminatory," she stated. "As a result, we continue to encourage the US to remove these discriminatory features from the law and guarantee that it is completely WTO compliant."

South Korea also stated on Thursday that it had conveyed concerns to the US that the measure may violate WTO regulations and a bilateral free trade agreement. South Korea's trade ministry said in a statement that it had urged US trade officials to relax criteria for battery components and final vehicle assembly.

South Korea's trade ministry met with Hyundai Motor and battery manufacturers LG Energy Solution, Samsung SDI, and SK. According to the statement, the corporations begged Seoul to assist them so that the measure would not put them at a competitive disadvantage in the US market.

South Korea's auto industry organization said on Friday that it had filed a letter to the US House of Representatives demanding that the US include EVs and battery components made or assembled in South Korea as eligible for US tax breaks, using the US-Korea Free Trade Agreement.

"Korea is gravely worried that the recent U.S. Senate's EV tax incentive measure includes provisions for discriminating between North American-made and imported EVs and batteries," the Korea Automobile Manufacturers Association (KAMA) stated in a statement. According to the report, South Korea has been providing incentives for EVs manufactured in the United States.

Hyundai stated that it is "disappointed that existing law drastically limits EV access and alternatives for Americans and may significantly hinder the market's shift to sustainable mobility."

Hyundai, which imports its flagship electric vehicles from Korea, has announced a $10 billion investment in the United States, which includes EV production in Alabama and Georgia.

Last week, a consortium of significant automakers said that most EV cars would be ineligible for tax incentives due to requirements that battery components and essential minerals be supplied in North America.

The EV tax relief is part of the Inflation Reduction Act, which is expected to be passed by the House on Friday and forwarded to Biden for approval.