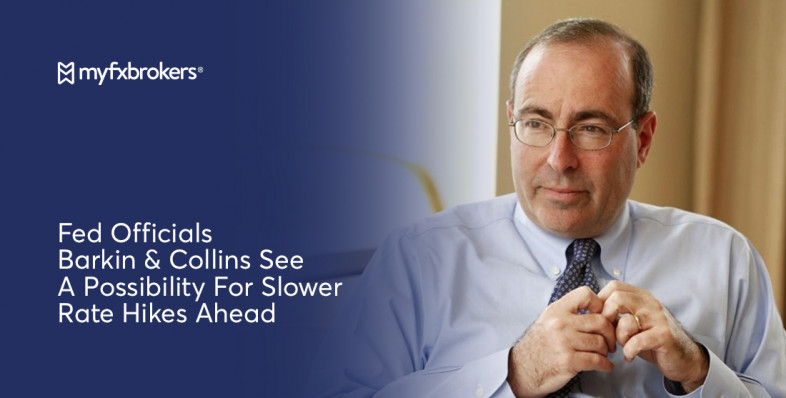 The Federal Reserve stated on Wednesday that, as part of its ongoing attempts to contain inflation, it would raise interest rates by three-quarters of a point to a target range of 3.75 to 4%.

Two Federal Reserve officials said Friday that they expect further interest rate hikes but would consider whether they need to be as aggressive as they have been this year.

Separately, Richmond Regional President Thomas Barkin and Susan Collins stated that the Fed is entering a new phase in which it would examine how much more restrictive policy is required.

In statements to CNBC, Barkin stated that rate hikes have shifted policy to the point where the Fed has shifted its foot from the accelerator pedal to the brake. He said that policymakers will "pump the brakes sometimes" and "act a little bit more defensively" in the new phase.

Barkin noted that the fed funds rate, which serves as a benchmark for short-term borrowing, might rise over 5% from its current target range of 3.75%-4%.

Friday's market pricing increased to a projected "terminal rate" of 5.14%, the highest level since mid-2007. The Fed approved a fourth consecutive 0.75 percentage point increase on Wednesday and hinted that more hikes are on the way.

"We need to get inflation back to target, and we need to do whatever we need to do with rates to do that," Barkin added. "It's certainly feasible that we'd wind up above 5%, but that's not a plan; it's an outcome of our effort to keep inflation under control."

Conversely, Collins emphasised the importance of combating inflation but also assessing the impact of the Fed's actions against loosening up on rate increases too rapidly.

"Policy has moved quickly into restrictive territory, but there is still work to be done," she said in prepared remarks. "In this next phase of policymaking, my focus is shifting from rapidly raising rates to determining the level that the funds rate must reach to be sufficiently restrictive to achieve the desired outcomes." "This acknowledges that the risks of inflation falling too slowly and the economy contracting too fast are becoming more balanced."

Collins has a vote on the Federal Open Markets Committee, while Barkin does not.

Both officials spoke on the same day that the Labor Department reported that nonfarm payrolls climbed by 261,000 in October, considerably exceeding the 205,000 expectation, and that average hourly earnings jumped 4.7% year on year, lower than the inflation rate but well over the Fed's 2% inflation target.

Collins highlighted that the study supported the notion that businesses continue to require labour despite a downturn in demand. "As policy tightens further, the risks of overtightening increase," she noted.

"As a result, it will become increasingly crucial to balance the danger of perhaps overly reducing economic demand with the risk of allowing inflation to linger for too long and potentially de-anchoring inflation expectations," she added.

The Fed announces its fourth consecutive 'mega' hike in interest rates of 75 basis points—here are four products that will cost more.

While boosting interest rates helps limit inflation by making borrowing more expensive and thus less desirable, it also increases debt expenses for Americans who are already battling with rising prices on almost everything, including necessities like food and rent.

According to Consumer Price Index statistics, the year-over-year inflation rate has remained persistently high, albeit decreasing from a June peak of 9.1% to 8.2% in September. This is far higher than the central bank's preferred inflation rate of 2%.

Fed Chair Jerome Powell has underlined his commitment to controlling inflation with recent rate hikes. However, in August, he recognised that raising borrowing costs will cause "some hardship to consumers and businesses."

By hiking its benchmark federal funds rate — the interest rate at which banks lend and borrow from one another — the Fed raises the cost of borrowing for consumers, which can temper inflation. However, rising interest rates inhibit economic growth, which can lead to a recession in which many people who are already facing higher costs lose their employment.

In the end, inflation directly impacts people's spending capacity more than interest rate increases. Although additional rises may create "some pain," the Fed's approach is intended to reduce prices.

Goldman Sachs economists predicted last week that the Fed would raise its target rate to 4.75% to 5% by March 2023.

This implies borrowing prices will continue to rise as more interest rate hikes are expected.

Rate increases raise the likelihood of a recession:

Many analysts believe that a recession – a persistent fall in economic activity over several months — is more possible in 2023 as interest rates continue to rise.

According to 14 analysts polled by financial services website Bankrate, the economy has a 2 in 3 likelihood of contracting in the next 12 to 18 months. According to a study performed at the beginning of the year, this is up from a one-in-three likelihood.

Likewise, a Bloomberg survey of 42 analysts expects a 60% chance of a recession over the next year, up from 50% a month ago.

A Bloomberg probability model predicts a 100% risk of a recession by October 2023.

What will get more costly?

When interest rates rise, customers should expect greater prices for various types of debt. Here are four of the most common:

Credit cards: According to Greg McBride, Bankrate's chief financial analyst, the annual percentage rate (APR) on credit cards is anticipated to rise to an average of 19% from 18.16% in late September. A $5,000 credit card bill with a 19% APR would cost an extra $1,197 in interest fees compared to a 16% APR, which was the average interest rate at the start of 2022.

The Fed may reduce the size of rate increases, but it is not “softening” the fight against inflation, according to Waller.

The Federal Reserve of the United States may consider delaying the pace of rate rises at its next meeting, but this should not be interpreted as a "softening" of the Fed's commitment to decrease inflation, according to Federal Reserve Governor Christopher Waller on Sunday.

Markets should now focus on the "endpoint" of rate hikes rather than the rate at which they are implemented, and that endpoint is likely to be "a ways off," Waller said in response to a series of monetary policy questions at an economic conference organised by UBS in Australia. "It is affected by inflation."

"We're at a stage where we may consider slowing down," Waller added, but "we're not softening... Stop worrying about the pace and start worrying about where the endpoint will be. That endgame is still a long way off until inflation is reduced."

According to him, a report released last week indicating slower-than-expected inflation in October was "excellent news," but it was "only one data point" that would need to be followed by other comparable readings to indicate clearly that inflation is slowing.

In 2023, the Fed is expected to lower interest rates.

Although this Federal Reserve has stated that interest rates will be raised—again—and economic uncertainty abounds, our long-term outlook for GDP and inflation remains substantially intact.

A recession in the next 12 months is just a coin flip away, but if it happens, it will be brief. Once the Fed has won the war against inflation, it will begin to lower interest rates in order to re-energize the economy.

It is anticipated that the Fed will begin to ease monetary policy in mid-2023, as inflation returns to its 2% target and the need to support economic growth becomes a major priority.

It is forecasted a year-end federal-funds rate of 3% in 2023, compared to the consensus of 4%. Further out, our 2026 and long-run Fed-funds rate and 10-year Treasury yield projections are 1.75% and 2.75%, respectively. However, we anticipate that interest rates will fall below these levels in 2024 and 2025 as monetary policy becomes more supportive.

Price pressures are expected to shift from inflationary to deflationary by 2023, owing to the unwinding of price spikes induced by supply bottlenecks in durables, energy, and other industries. This will greatly simplify the Fed's job of managing inflation. In fact, we believe the Fed will overshoot its target, with inflation averaging 1.7% between 2023 and 2026.

The inflation analysis is crucial to the short-term GDP and interest rate estimates. If inflation gets considerably more ingrained, the Fed will be forced to produce a sharp short-run recession by raising interest rates much higher than we anticipate.

As long as the Fed is allowed to begin easing in 2023, GDP should avoid a significant decline and begin to increase in 2024 and 2025. The most volatile component of GDP growth will be housing, which is the most interest-rate sensitive main component of GDP. Lower rates will be required in 2024 and 2025 to improve house affordability through lower mortgage rates and thereby resuscitate demand in an ailing housing market.

The Fed's reversal should give welcome comfort to investors. Rising interest rates have played a significant influence in the 2022 selloff in both equities and bonds. Bonds will undoubtedly rise if yields decrease in line with our projections for the next five years. While not assured, we anticipate that falling interest rates will likely boost stock values.

Interest-Rate Forecast for the United States: What Is Expected in the Future

In the short run, the interest-rate estimate is based on the Fed's efforts to smooth out economic cycles. The Fed's goal is to maintain inflation low and stable while minimising the output gap (the departure of GDP from its maximum sustainable level). When the economy is overheated (the output gap is positive and inflation is high), as it is today, the Fed aims to restrain growth by raising interest rates.

In the long run, the Fed generally fades from view. Interest rates are instead driven by underlying economic currents such as demographics, productivity growth, and economic inequality. These dynamics have caused interest rates in the United States and other major economies to fall.