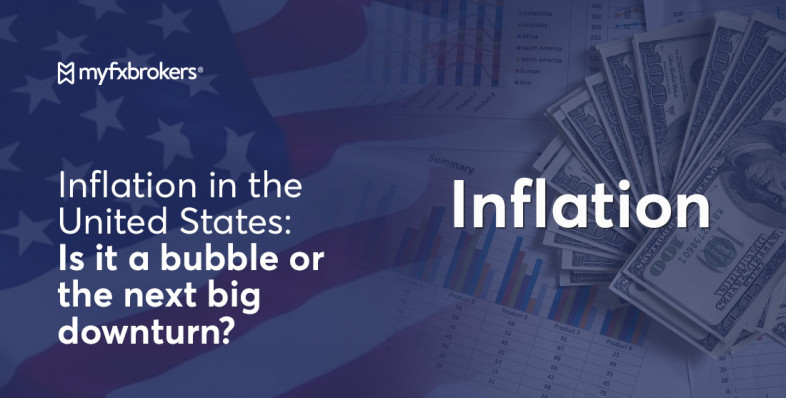 Inflation in the United States: Is it a bubble or the next big downturn?

The Covid narrative is almost over, but a newer possible disaster is still likely to occur and damage public life. Just as the medical emergency problem was returning to its origins, with some remnants still visible in some regions of the world, the financial threat began to appear in many forms. Whether it is a press release by major economists and policymakers or the performance of the stock market on Wall Street, all of these have been a source of concern for policymakers and FED officials prescribing corrective measures.

In the midst of all of this turbulence, market participants and the general public in the United States might benefit from knowing about recent trends and data.

The S&amp;P 500 Index has seen its highest four-day increase since early July. This is owing in part to predictions that Tuesday's inflation report would show some softening ahead of the Federal Reserve meeting next week.

After three weeks of declines, the index is again bouncing about 4,110 points, near to its 200-day moving average of 4,270. Failure to break – and then hold – above the important technical support level following the inflation data may imply that the market is poised to collapse lower.

Treasury Secretary Janet Yellen expressed confidence that the US economy will escape a recession, but noted that Americans understand the Federal Reserve's responsibility to battle inflation. "My goal is that we can have a gentle landing," she said in an interview with CNN on Sunday, "but Americans realise that it is necessary to get prices down, and in the long run, we cannot have a vibrant job market without inflation under control." These remarks are consistent with those of Fed Chair Jerome Powell, who declared last week that he and his policymaking colleagues at the central bank are "fully committed" to containing inflation, which remains around a 40-year high.

With officials gradually devising steps to limit inflation, investors are anxious about what can be done to address it all in the best way feasible. With the CPI following an erratic path over the months, consumer expectations will play a larger role in the coming weeks. According to Bloomberg surveyed experts, US consumer-price inflation is likely to decelerate in August, with CPI climbing 8% year on year in August, compared to 8.5% in July. Another surge might push the index over its 200-day moving average for the first time since April.

Another thorn in the plot is the ordinary public's desire for cash on hand. With a lot of money stranded in loans and securities, as well as unexpected financial gains, money for usage is something long-term middle-class investors think about. This creates the ideal environment for financial advise and aid professionals to provide help for the impending economic storm. However, top experts have differing opinions on such techniques, with some preferring to use such solutions due to the long-term brand name in the market.

Fed rate rises are meant to keep inflation at 2%, but this necessitates limiting new job postings and witnessing growing unemployment. "FED tightening has led to price declines in goods and commodities owing to demand downturns, with services and rent being notably more resistive," the Fed stated.

The extent of a rate rise at the FOMC's September meeting may be largely influenced by August CPI numbers. Some predict the Fed to raise rates by 50 basis points, while many experts expect the Fed to hike rates by 0.75 percentage points for the third time in a row to battle strong inflation. Fed Chairman Powell has previously acknowledged that hiking interest rates will help to battle inflation.

On the other hand, the oil story has been warped, with important interests indirectly affecting world prices since the Covid aftermath. One of the most significant comes from immensely profitable firms with significant market power, who are exploiting inflation to justify price increases.

Profits at oil and gas companies, for example, are at an all-time high. Chevron's profits climbed beginning in the first quarter of 2021, while ExxonMobil's income more than quadrupled despite a $3.4 billion loss from the sale of its Russian operations. ExxonMobil will utilise its record earnings to promote stock buybacks rather than lower gas prices for consumers. The oil company has raised its stock repurchase programme from $10 billion to $30 billion. It must be highlighted that the Fed's rate rises will have no effect on this pricing.

The markets will continue volatile between September 21-22 as a result of a mix of excellent, poor, and bleak macroeconomic data. Any negative press will aggravate the problem.

Inflation is high, but it is likely to cool in August as fuel prices fall, supply chains strengthen, and travel costs fall.

The consumer price index will be issued at 8:30 a.m. on Tuesday. ET, and the data may be a little jumbled because headline inflation is projected to decrease but core inflation, excluding energy and food, is likely to climb. The study is especially significant because it is anticipated to impact the Federal Reserve's decision on how much to raise interest rates next week — and, more crucially, how much to hike interest rates in the long run.

According to Dow Jones, the CPI for all goods is expected to have decreased by 0.1% month over month in August, following a flat reading in July. The headline CPI would then be running at an annual rate of 8%, down from 8.5% in July.

Core CPI, excluding gasoline, is forecast to grow by 0.3%, the same as in July. On a year-over-year basis, that would represent a 6% rise, which would be even higher than the 5.9% gain in that month.

For the Fed, the report is largely expected to reinforce the need to maintain its fight against inflation with a 0.75 percentage point raise next week, the third in a row. If inflation data is less than expected, some analysts believe the Fed may only hike rates by half a percentage point.

"The danger is that it will come in a little softer," said Aneta Markowska, head economist at Jefferies. "I have energy goods down 10.2%, which should take off a half percent, but I believe the core will be more crucial."

Keeping an eye on gas costs

Gasoline prices are the primary cause of the energy price reduction. According to AAA, the national average price unleaded petrol has declined all summer, from $5.01 in mid-June to $3.71 per gallon on Monday.

"I believe we'll see a recurrence in terms of airfares and hotel rates, which brought down the core CPI last month; airfares are expected to be down 8%," said Markowska. "From March to May, they were up 40%, and we're only unwinding a piece of it."

According to economists, the increase in August core inflation is due to the base effects of comparing the statistic to previous year.

"Because of base effects, annual core inflation will likely increase in the next two reports, making difficult headlines for the Fed," stated Blerina Uruci, senior US economist at T. Rowe Price. Price, Rowe She believes it will not matter to central bank authorities since they will be more focused on momentum and the three- and six-month annualised rates.

"However, they are also concerned about how it would appear to the public and Congress, giving them even more motive to adopt a hawkish stance," she added.

According to strategists, the August CPI data may influence the Fed's September 21 rate decision, but the specifics included inside that report may be more relevant in terms of what they suggest about the longer-term forecast.

Looking ahead to the finish line

The market's projection for the Fed's terminal rate has been rising, and the futures market predicts it will hit 4% by early next year. Markowska predicts it will be between 4% and 4.25% in January.

"This puts them into tight policy, and then it's a matter of how tight they want to go," Swonk says.

This is an important subject for markets since some experts believe the Fed will take a break before the end of the year. Others anticipate a halt early next year, with some investors expecting the central bank to begin cutting interest rates in the second half of 2023.

Fed officials, led by Chair Jerome Powell, have stated that interest rates would be raised and maintained. Nonetheless, the market continues to believe that authorities would not be as severe as they say.

"I don't believe this data changes anything for the Fed; I think the Fed's difficulty is that even while inflation is dropping, economic momentum is going up in part due to decreased energy costs," Markowska said. "That increases buying power."

She claims that people are transferring cash that were previously spent on gasoline to other goods and services. This might keep the economy hotter than the Fed would like, and she is now forecasting 3% or higher growth in the third quarter.

"That's above-trend growth at a time when the Fed should be engineering below-trend growth," Markowska explained.