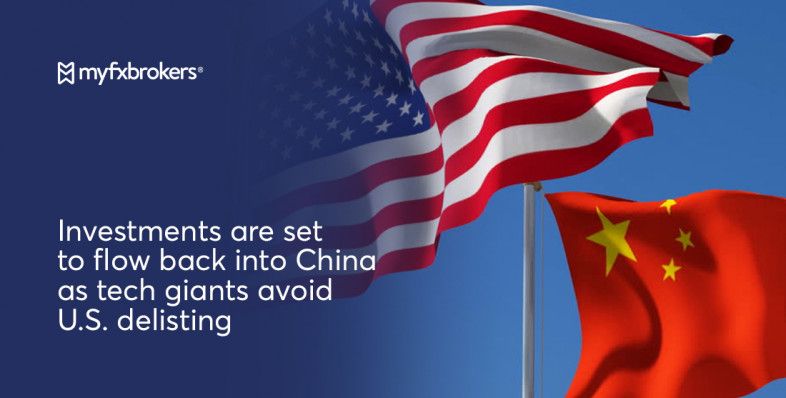 According to one investment manager, investors may restore trust in Chinese technology equities if these businesses escape delisting from U.S. stock exchanges and the Chinese government offers policy assistance.

After China finally gave the US access in August, the Public Company Accounting Oversight Board said last week that it now has full access to audit and investigate Chinese corporations for the first time.

More than 100 Chinese digital companies, including Alibaba, Baidu, and JD.com, threatened delisting in the United States in 2024 if their audit information was not made available to PCAOB inspectors.

Investors frequently experience a lack of disclosure in Chinese equities.

"It will allow institutional investors to return. "Professional investors were quite concerned about the danger of delisting, which is why they waited on the sidelines," Brendan Ahern, chief investment officer of US-based investment management KraneShares, told CNBC's "Squawk Box Asia" on Wednesday.

In accordance with the United States-China Economic and Security Review Commission, there were 262 Chinese businesses listed on US markets as of September 30, with a total market valuation of $775 billion.

"With that risk removed as a result of the PCAOB announcement, you will see investment funds come back into these stocks," Ahern said.

"When it comes to China, these internet titans are truly where investors want to invest," said Ahern.

However, he cautioned that it is still "early days, weeks, and months" before "that money returns back into the space."

However, he also stated that legislative assistance will help these enterprises expand. China committed last Monday to increase domestic consumption next year as the nation steps toward increasing GDP after abandoning its zero-Covid policy.

"2023 is likely to be a year with a lot of government policy assistance, such as increasing domestic spending," Ahern added. "The corporations account for around 25% of total retail sales."

"The Chinese government truly needs these internet businesses, which is why we've seen some of the regulatory scrutiny we saw in 2021," Ahern said.

Where does the China-US tech war go from here?

An examination of the implications for third countries is presented here by Johanna Costigan, Shihoko Goto, and Alexandra Seymour.

The US government issued a substantial set of new laws restricting China's access to breakthrough technologies in October. A few weeks later, at the 20th Party Congress and in a subsequent white paper, China's authorities reaffirmed their desire to become a major technology force.

What will happen next in the China-US fight for technological dominance? And how would the "tech war" affect third-world countries, as well as the global technology sector? Watch the video of our November 29, 2022, conversation regarding the future of the China-US tech rivalry.

Johanna M. Costigan, a Junior Fellow at the Asia Society Policy Institute's Center for China Analysis; Shihoko Goto, the Wilson Center's Director for Geoeconomics and Indo-Pacific Enterprise and Deputy Director for the Asia Program; and Alexandra Seymour, an Associate Fellow at the Center for a New American Security's Technology and National Security Program.

US-China tensions spur TSMC to triple its US investments

Taiwan Semiconductor Manufacturing Company (TSMC), the world's largest chipmaker, announced on Dec. 6 that it will more than triple its investment in the United States to $40 billion to manufacture advanced computer chips there, amid growing concerns that China may attack Taiwan, where TSMC is headquartered. The promise is also a victory for the Biden administration's efforts to attract critical components of the semiconductor supply chain to the United States.

TSMC is now constructing a $12 billion semiconductor manufacturing factory, or "fab," in Phoenix, Arizona, with the goal of producing 5-nanometer (N5) chips, which are extensively used in smartphones, by 2024. TSMC revealed plans to establish a second fab in Arizona in 2026 to make more sophisticated 3-nanometer (N3) chips, the most advanced currently available, ahead of an equipment installation ceremony at the plant today, according to Nikkei Asia.

In addition, the business expects to produce 4-nanometer (N4) chips at the initial fab meant to produce N5 chips. N4 chips are presently found in high-end smartphones such as the iPhone 14 Pro.

Apple relies heavily on TSMC. President Joe Biden and Apple CEO Tim Cook, among other IT executives, are set to attend today's equipment installation ceremony. Warren Buffett's Berkshire Hathaway, a major stakeholder in Apple, purchased a $4 billion investment in TSMC, or 1.2 percent of the firm, in November.

The Commerce Department introduced trade restrictions in October that made it impossible for US businesses to sell chip-making equipment to dozens of mainland Chinese enterprises.