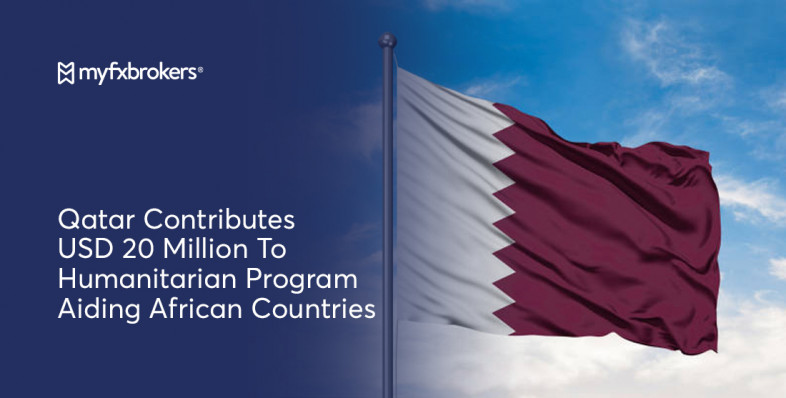 The State of Qatar announced its contribution of USD 20 million in support of a humanitarian program "Grain from Ukraine" which aimed at helping African countries to get Ukrainian grain exports.

This came in a speech delivered via video conference by HE Deputy Prime Minister and Minister of Foreign Affairs Sheikh Mohammed bin Abdulrahman Al-Thani before a ceremony to launch the program in the Ukrainian capital city of Kiev.

At the beginning of the speech, His Excellency conveyed the greetings of HH the Amir Sheikh Tamim bin Hamad Al-Thani, coupled with his best wishes that the ceremony and the program would be a success. His Excellency expressed his sincere thanks and appreciation to HE President of Ukraine Volodymyr Zelensky for the kind invitation.

HE The State of Qatar, according to the Deputy Prime Minister and Minister of Foreign Affairs, welcomed programmes and projects that will enhance and improve food security and develop sustainable solutions to increase country resilience, and welcomed Ukraine's initiative to launch the humanitarian programme "Grain from Ukraine" as an initiative to help African countries obtain Ukrainian grain exports.

His Excellency stated that the current global issues highlight the critical need to strengthen interdependence and integration among nations, emphasising that disadvantaged and vulnerable populations in many communities suffer the brunt of the effects of these challenges.

He went on to say that the mounting challenges to global food security and the stability of energy supplies for millions of people around the world as a result of the ongoing conflict in Ukraine, as well as the risks of malnourishment and famine as a result of disruptions in production and supply chains, necessitate unprecedented international attention, constant cooperation, as well as a straightforward command of priorities, the most important of which is humanitarian.

His Excellency stated that the State of Qatar has called for a speedy peaceful solution to the Ukrainian conflict since its inception, noting that it welcomed the Black Sea initiative to transport grain as part of the State of Qatar's consistent policy of cooperation and partnership with the international community, and as part of its ongoing efforts to promote international peace.

He stated that Qatar has traditionally been one of the first countries to respond to global crises, including the food security issue, and that the country is eager to redouble its efforts to respond to this crisis within a coordinated framework and in collaboration with international partners.

In this context, His Excellency stated that Qatar Fund for Development (QFFD) responded to emergency humanitarian concerns inside the Horn of Africa by pledging USD 12 millions to assist remote communities attain food and nutrition security and increase resilience, and also the Fund contributed a total financial contribution of USD 90 million to the World Food Programme. Furthermore, the State of Qatar donated USD 5 million to the Ukrainian Ministry of Health in order to supply ambulances and other medical equipment.

He emphasised that the world's current situation shows the critical need for continuing support for food-insecure people who rely mostly on grains for their food basket, particularly in Africa and Asia.

What Is Humanitarianism in Africa All About?

Natural catastrophes, conflict, and economic shocks (such as increases in food and fuel prices) all have a negative impact on growth, reversing hard-won development achievements and increasing poverty and insecurity. During crises, women are frequently at a higher risk of assault. Australia's humanitarian action saves lives, builds resilience, and assists people in overcoming poverty by decreasing risks from, preparing for, and reacting to emergencies. Africa has enormous humanitarian needs. Humanitarian crises typically include enormous displacement of people and extensive loss of life and livelihoods as a result of conflict and natural catastrophe, severely limiting communities' ability to recover.

The overarching purpose of Australia's humanitarian aid is to save lives, relieve suffering, and restore dignity to those affected by displacement, armed conflict, natural disasters, and other humanitarian emergencies.

Australia's humanitarian response in Africa will be commensurate with Australian public expectations, the magnitude of humanitarian need, and our record as an active contributor to the United Nations and other international agencies.

Australia monitors and reacts to humanitarian crises depending on the needs of those impacted, the reality on the ground, and our capacity to do so. In addition to the $50 million pledged to the World Food Programme (WFP) for global food aid in 2022-23, Australia has pledged $15 million in emergency assistance through the WFP and the Emergency Action Alliance in response to the earthquake in Nepal.

Qatar has been a United Nations member since 1971. The Permanent Mission of the State of Qatar to the United Nations in New York was established the same year to represent Qatar and manage its relationship with the international organisation. Her Excellency Sheikha Alya bint Ahmed bin Saif Al Thani is Qatar's current UN Ambassador.

Qatar values its strategic partnership with the United Nations and has always worked to achieve its goals, which include international peace and security, international development, human rights promotion, humanitarian assistance, and participation in collective action to address existing and emerging global challenges.

Qatar's UN commitment: Qatar has made - and continues to make - financial contributions to different UN organisations and entities to assist development and humanitarian relief programmes.

HE the Deputy Prime Minister and Minister of Foreign Affairs Sheikh Mohammed bin Abdulrahman Al Thani and HE the Secretary-General of the United Nations António Guterres signed several agreements on the sidelines of the 2018 Doha Forum, demonstrating Qatar's active role in achieving international peace, security, and sustainable development.

Qatar is likewise dedicated to the creation of long-term programmes and projects in collaboration with the United Nations.  Education Above All Foundation (EAA) and its worldwide partners UNICEF and UNESCO celebrated the inaugural International Day to Protect Education from Attack on September 9, 2020. World leaders and campaigners emphasised the importance of immediate on-the-ground action to defend education, stressing that silence on the willful slaughter of children in classrooms puts decision-makers on the wrong side of history.

The International Day was established by a UN General Assembly resolution (A/RES/74/275) in response to Her Highness Sheikha Moza bint Nasser, EAA Chairperson and UN Sustainable Development Goals Advocate, as a global platform for judgement to concentrate on protecting schooling all through dispute and post - conflict reconstruction.

Qatar and the United Nations inked a number of agreements in March 2021 to establish new UN headquarters in Doha. As part of efforts to promote global sustainable development goals, a United Nations Development Programme (UNDP) office will be established, whereas the new UN Office for the Coordination of Humanitarian Affairs (OCHA) will endorse the UN mission of organising global humanitarian operations via collaborations with both national and international actors.

As part of its long-standing commitment to the UN and less developed nations, the State of Qatar has inked an agreement with the UN to host the UN's 5th Conference on the Least Developed Countries in October 2021. (LDC5). The conference resulted in the endorsement of the Doha Programme of Action (DPoA) for the LDCs for the Decade 2022-2031, which would assist these countries in addressing difficulties like the COVID-19 pandemic, economic crises, and climate change.

Qatar will continue to collaborate with several United Nations entities in April 2022. The most recent of these collaborations resulted in the signing of a memorandum of understanding (MoU) between the State's Ministry of Sports and Youth and UNICEF to increase cooperation on topics linked towards the socio - economic empowerment and participation of Qatari youth.

Recently, Qatar has backed a number of programmes, including the Sports for Peace and Development Initiative, which aims to use sport as a tool for peace and development by creating an inclusive sports environment for young people and future generations.

As part of the Afghanistan Conference 2022, Qatar's Ministry of Foreign Affairs collaborated with the United Kingdom, Germany, and the United Nations Office for the Coordination of Humanitarian Affairs (OCHA) to co-host a "High-level Pledging Event on Supporting the Humanitarian Response in Afghanistan." Furthermore, Qatar offered an extra USD 25 million to bolster the international humanitarian response to the country's mounting economic catastrophe.

Qatar's help to nations in economic crisis goes beyond financial aid and includes rights-based advocacy and assistance. Qatar has reaffirmed its support for Afghan girls' and children's right to education in the nation, warning that failure to ensure children's access to education will damage human rights, sustainable development, and the economy, particularly in conflict and post-conflict communities.