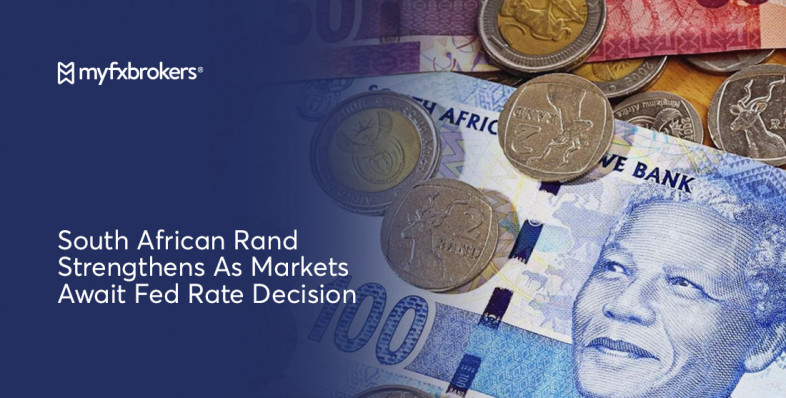 The dollar fell Tuesday before the Federal Reserve meeting as investors focused on the possibility that the U.S. central bank would adopt a less aggressive policy stance. This led to a strengthening of the South African rand.

Investors anticipate the Fed to hike its benchmark overnight interest rate by 75 basis points (bps) this week. Still, the fed funds futures market has priced in a 57% chance of a 50-bps increase for December after Fed members' comments that the rate-tightening process may slow down.

The rand and other emerging market currencies have benefited from the market's improved risk sentiment before the Fed's announcement.

The Top-40 index on the Johannesburg Stock Exchange concluded the day up 1.28%, while the more extensive all-share index gained 1.11%.

After technology investment firms dismissed as "untrue" a newspaper story on a potential sale of its 28% share in Chinese software and gaming giant Tencent, Naspers and Proses were the leading gainers, rising more than 8%. The benchmark 2030 bond issued by the South African government performed better in afternoon trades, with a five basis point decrease in yield to 10.810%.

What Does South Africa’s Outlook Say?

According to Jeff Schultz, head economist for the Middle East and Africa at BNP Paribas, as the prognosis for the world economy grows gloomier, things worsen for South Africa's economy.

The financial organization has downgraded its projection for South Africa's economic growth to 1.7% in 2022 and drastically reduced predictions for 2023, dropping by 0.6 percentage points to 0.2%.

In a note on Wednesday (9 September), Schultz stated that the outlook for South African growth and activity "does not look good," given that the United States and Europe are expected to experience a recession in 2023, and China is facing its growth difficulties as it tries to modify its zero-Covid policy.

He added that South Africa's growth and activity are closely associated with the US, demonstrating a 1.3 percentage point (pp) impact on domestic GDP from every 1 pp shift in US growth. "A developed market recession matters for South Africa," he said.

In addition, the finance group's already much below-consensus prediction for GDP growth has been further reduced due to more shaky structural growth issues, such as the domestic energy supply declining to levels seen during the most recent recession.

It is believed that the second half of the year would have been badly impacted by much worse load-shedding than the group's already pessimistic predictions envisaged, according to Schultz, who claims that the reduction to the 2022 GDP estimate is based on this opinion.

This opinion has been made worse by the temporary force majeure brought on by early-quarter labor disputes at essential ports.

The analysis indicates a weak 0.2% short-term economic growth potential, which is still recovering from the Covid-19 growth impact. Policymaking would probably become more difficult in 2023, he said.

"We have made a strong case that, in 2023, larger pay settlements, inventory restocking, and lower productivity will cause inflation to prove stickier than most anticipate. We continue to hold these beliefs and anticipate that from an expected 6.8% in 2022, headline CPI inflation will decelerate to an above-consensus 5.8% in 2023.

Overall, the group predicts that inflation will only begin to steadily return to the Reserve Bank's midpoint objective of 4.5% starting in late 2024, many months later than more optimistic predictions of a return to the target range in early to mid-2024.

BNP Paribas has a pessimistic outlook for the South African economy and believes that high inflation will persist for longer than many other economists and experts have predicted.

It is contended that this sets up a problematic stagflation phase for the South African economy in 2023.

The financial organization stated that South Africans shouldn't anticipate the Reserve Bank breaking from its rate hikes cycle any time soon in light of this pretty gloomy prognosis.

Stagflationary conditions are not ideal for the SARB, but the central bank won't give up on its goal of maintaining pricing stability, it said.

Without excluding the prospect of a 100bp hike, the group predicts at least one more 75bp increase on November 24 and then the last 50bp increase in January to a terminal 7.50%. It is anticipated that 2023 will likely see more hikes than decreases in the number of tax increases.

SARS Game In The Role

There are signs that the South African Revenue Service is cracking down on tax fraud in the country and stepping up its efforts to prosecute offenders who operate outside the law.

According to Tax Consulting SA, after SARS showed up at the door of a private hospital and its director this week and accused them of tax fraud, "the chickens are coming home to roost" for offenders.

"The days when tax criminals could outwit SARS are long gone. According to tax specialists, it has recently stepped up its efforts to combat tax evasion by pursuing criminal action against noncompliant taxpayers.

"It is evident from this that SARS is no longer allowing tax fraud to flourish without taking any corrective measures. Voluntary compliance should be made simple, according to SARS Commissioner, whereas non-compliance should be a challenging and expensive experience.

According to the consulting firm, taxpayers should take advantage of the Voluntary Disclosure Programme offered by the revenue agency to disclose any discrepancies in their tax affairs.

"The Tax Administration Act, No. 28 of 2011, offers taxpayers cooperating with SARS a reprieve. It stated that the only option to avoid prison time is to submit a VDP application to SARS.

In cases when the taxpayer contacts SARS with an application before being notified of an audit or criminal inquiry, SARS agrees through the VDP to provide amnesty from criminal prosecution and to waive all understated penalties.

The only exception to this rule is when tax evasion is done on purpose or with gross carelessness, wherein the fines are 5% and 10%, respectively. The VDP application submitted by a taxpayer must meet the following criteria:

The disclosure must be made before SARS notifies the taxpayer of an audit or criminal inquiry;

The information must be given willingly;

No disclosure must have been made for a comparable "default" in the five years prior;

The information must be entirely materially stated and comprehensive;

The disclosure must be made in the required form and manner, and it cannot result in a refund that SARS is owed.

A VDP agreement is subsequently reached between the taxpayer and the Commissioner of SARS, should SARS approve the VDP application. Therein, the essential details of the case are stated, and a payment schedule for any sums owed to SARS is decided upon, according to Tax Consulting.

"In exchange, SARS undertakes to drop any criminal charges and pay back any understatement fines. Nevertheless, interest is always due.

The warning comes when SARS is stepping up its ability and capabilities to crack down on tax evasion and other methods used to evade or avoid paying taxes in the nation.

Along with expanding its personnel, establishing connections with other governments, and using cutting-edge tools that use automation and big data to track down tax evaders, the taxman is also winning cases in court.

A recent case involving billionaire Christo Wiese showed that not even the highly affluent and their companies are exempt from paying taxes.

The National Treasury has challenged SARS to raise billions more in tax income, and SARS is preparing to accept the challenge. The message is clear: SARS is not fooling around.

SARS is now anticipated to collect R1,682 billion in taxes this year, up R84 billion from the February Budget, according to the interim budget presented by National Treasury in October.

According to SARS commissioner Edward Kieswetter, the tax collection agency has accepted the challenge. Even if the updated income forecast is high, he added, "we are determined to act in a way that is consistent with the law to meet this challenge."

According to Tax Consulting, if South Africans follow this warning, a shift in tax morality may be generated.

"Taxpayers should act immediately to properly notify their default to SARS if their tax affairs are in disarray. Timing is crucial because if SARS appears before your disclosure, the VDP route will be closed to you, and prison time will beckon.