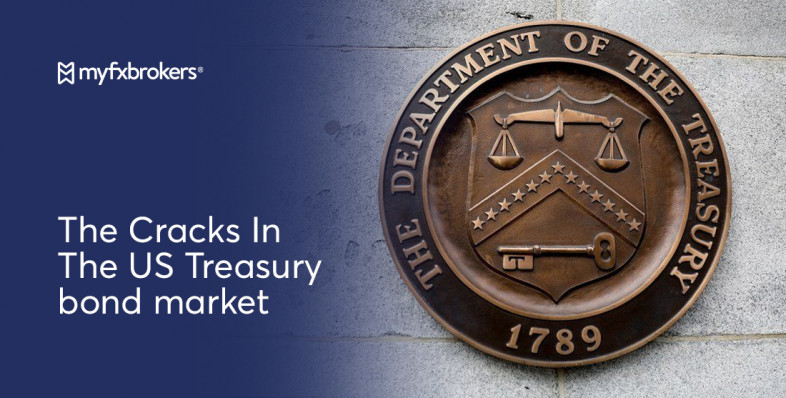 The Cracks In The US Treasury bond market

The collapse of UK gilts showed the fragility of big bond markets. Could the largest of them withstand a selling frenzy?

Buying and selling bonds in the world's largest bond market should be simple. However, most of this year has been anything from clear, according to Gregory Whiteley, a bond portfolio manager at DoubleLine Capital.

Whiteley claims that a trader might routinely obtain $400 million in US Treasury bonds - hardly a large sum in this $24 trillion market. But now, he continues, it usually entails breaking up the order into smaller chunks; perhaps making $100 million of the trade electronically, and then picking up the phone to see if they can pry the remainder of the debt from the hands of Wall Street's trading desks over the course of a day.

Fears of a global economic collapse caused a rapid drop in prices and liquidity in the US Treasury bond market at the outset of the coronavirus outbreak.

Today, as the Federal Reserve struggles to control inflation, a recession looms, and most asset values have plummeted, the world's most significant bond market is creaking once more.

The market's liquidity — a key indicator of how well it is working — is at its lowest since March 2020, following a precipitous drop in the previous year. According to Jay Barry of JPMorgan, market depth, a measure of liquidity that refers to a trader's capacity to buy or sell Treasuries without changing prices, is also at its lowest level since March 2020.

All of this was occurring before the current breakdown in UK government debt, which has heightened concerns about the susceptibility of the world's major bond markets.

While investors are not concerned about a repeat of the UK crisis, in which pension funds made large-scale leveraged bets on bond direction, many are concerned that an unexpected wave of selling could quickly overwhelm the US bond market's shaky infrastructure.

"The wobble in the gilts market was a fire drill for everyone else," says HSBC's global head of fixed income research, Steven Major. According to investors, in some circumstances, a lack of liquidity is causing volatility in US bond prices rather than the other way around.

Regulators have unveiled a raft of initiatives aimed at boosting market functioning. Officials from the New York Fed will address ongoing efforts to increase market resilience with industry executives at a key annual meeting on Wednesday.

"My opinion is that markets are well functioning, trading volumes are robust, and traders are not having problems executing trades," US Treasury Secretary Janet Yellen said in a speech on the subject at the end of October. She stated that reforms were being explored to "enhance the Treasury market's ability to absorb shocks and disruptions rather than intensify them."

The Securities and Exchange Commission has proposed two ambitious measures to strengthen the market's resilience, while the Treasury has been consulting on a plan to buy back illiquid bonds.

The Fed has intervened to stabilise markets in prior crises, such as in March 2020, and investors believe that if the situation calls for it, it may pause its ongoing attempts to sell down some of the securities on its balance sheet or even restart its quantitative easing programme.

The sense of vulnerability around the US Treasury market, on the other hand, is a major source of concern for investors, given that everyone, from pension funds to foreign governments, puts their money in the market for safekeeping, making it the world's de facto borrowing benchmark.

Any protracted issues or price declines would have worldwide ramifications, reverberating through stocks, corporate bonds, and currencies.

"It's not just the fact that we have shitliquidity. . . It's also what that means for financial regulation, which is solely based on Treasuries being easily sold," says Yesha Yadav, a Vanderbilt Law School professor who studies Treasury market regulation. "If you can't guarantee that because liquidity isn't working as it should, I think it says something about broader financial market stability, not just Treasury market stability."

Investors recognise that, regardless of market dynamics, liquidity in the Treasury bond market was bound to decline this year.

Treasury yields, which move in tandem with interest rates, have been far more volatile than usual as the Fed has tightened monetary policy aggressively. With so much uncertainty, it was unavoidable that trading would become more difficult and expensive. While the cost and difficulty with which investors trade Treasuries has increased, trading volumes have stayed stable through 2022, according to Sifma, the securities industry's trade body.

"As volatility goes up, it is only natural for the cost of transactions to go up. Volatility has gone up significantly, as we’ve seen the Fed hike rates in 75 basis point increments at an unprecedented pace,” says Isaac Chang, head of global fixed income trading at Citadel. “Liquidity concerns need to be viewed in that context.”

Increased volatility in the market tends to limit liquidity. However, according to some seasoned US Treasury market monitors, the causal relationship has begun to shift in the opposite direction, with illiquidity now driving some of the volatility.

Until August of this year, Brian Sack, the director of economics at hedge fund DE Shaw, was the vice-chair of the Treasury Borrowing Advisory Committee. The committee advises the Treasury on how much and what it should borrow, and it issued a report on market liquidity difficulties in May.

"We've observed concerns about Treasury market functioning for much of the year, but for a time this appeared to be primarily driven by yield volatility stemming from fundamental events," adds Sack.

"Unfortunately, liquidity in the Treasury market has deteriorated more in recent months." This recent trend is more alarming since it appears that market functioning has become a greater source of risk, rather than simply reflecting the uncertain fundamental environment."

Most analysts believe that the liquidity problems in the Treasury market are caused not just by quickly fluctuating prices, but also by a lack of buyers, or the buyers' inability or unwillingness to absorb all of the supply.

According to HSBC's Major, the Treasury Department's discussion of buying back some of the most illiquid Treasury bonds is an implied acknowledgement that falling demand is causing concerns.

One reason for the current doubts about demand is that the Treasury market has grown in size in recent years, and the biggest buyers of that debt, most notably the Fed and the Bank of Japan, are reducing their purchases. As part of its quantitative tightening campaign, the Fed has started withdrawing from the Treasury market. And, driven by Ministry of Finance regulations, the Bank of Japan has been selling part of its foreign bond holdings, considered to be primarily Treasuries, in order to boost the yen against the strong dollar.

Increasing rates of interest may cause the Treasury market to expand even more. "To pay the interest rates, the whole Treasury market will rise considerably," says Chris Concannon, president of the trading platform MarketAxess. "You're going to see significant growth just to fund the payments required to pay the rates."

The withdrawal of significant buyers in the Treasury market is also a result of post-crisis policies that have made it more expensive for primary dealers — banks that buy bonds directly from the Treasury and have been a longstanding source of liquidity — to keep Treasuries.

As main dealers' roles have been reduced, high-speed traders and hedge funds have stepped in to offer much-needed liquidity. These investors are less regulated than primary dealers and have acted differently. According to market observers, there have been significant periods of market insecurity during which high-speed traders have withdrawn from supplying liquidity.

The presence of hedge funds and high-speed traders has significantly increased market leverage, which aggravated the market crisis in March 2020. As panicky investors sold Treasuries, hedge funds in the basis trade, which tried to exploit slight abnormalities in bond prices, were forced to unwind their positions, hastening the sell-off.

It's difficult to say whether equivalent leverage pools exist in Treasuries. Treasuries trading is opaque, and information concerning positioning, particularly among non-banks, is difficult to come across. The accessible data, such as that included in the Fed's financial stability report, is only disclosed after a several-month delay.

According to the most recent data, hedge fund leverage measures are above historical averages. "These gaps [in data receipt] increase the likelihood that such enterprises are employing leveraged positions, which could magnify adverse shocks, particularly if they are financed with short-term funds," according to the research.

In the midst of such worry, officials have quickly reminded us that the market has not been disrupted.

Despite this year's extreme volatility and inadequate liquidity, there has been no evidence of forced selling of significant leveraged positions. Because of the intense focus on the market, any indicators of trouble may be detected rather soon, even if transparency in Treasury market data is typically weak.

In contrast to the topic of probable illiquid bond buybacks, at least one Fed governor has discussed the prospect of lowering some of the capital requirements on large banks, allowing their balance sheets to keep more Treasuries.

There have also been initiatives to improve the market's operation. Indeed, the SEC's plans potentially represent the most significant reforms in US market regulation since the Dodd-Frank Act of 2010.

The two primary proposals would regulate non-bank actors in the Treasury market in the same way that banks are regulated. The dealer rule would compel any Treasury market player trading more than $25 billion per month to register as a dealer, requiring them to be more transparent about their trading and positions and increasing their capital requirements.

The second plan would require more trades to be centrally cleared, which would mean that more Treasury market transactions would have to be guaranteed by a third party, and the participants in the transaction would have to have more cash on hand to place the wagers.

In an October report, the International Financial Stability Board, which makes financial rule recommendations to the G20 nations, stated that increasing the capital cushion required of non-bank liquidity providers and encouraging central clearing could help to stabilise core markets such as Treasuries in times of poor liquidity.

The SEC's proposal for central clearing has received little criticism, but the dealer rule has. Hedge funds, in particular, have stated that the restrictions are so broad that they will affect funds that trade in the Treasury market on a regular basis to manage risk, as well as those that do speculative trades. Furthermore, hedge funds traditionally operate with thin balance sheets and borrow to make wagers, so the additional capital requirements will fundamentally alter the company.

These developments are so profound that several hedge funds have threatened to exit the market entirely, exacerbating the market's liquidity concerns.

If this reduces their involvement in the Treasury market, new buyers for US government debt will need to be found, especially once the rules go into effect in the coming years.

"It's possible that the real risk will emerge only after a year of QT [quantitative tightening] and increased private absorption of Treasuries because a new set of holders will have to be found, and maybe some of those turn out to be weak hands," says Brad Setser, a fellow at the Council on Foreign Relations and a former Treasury official under President Obama.

A large-scale Treasury market crisis would very certainly prompt the Fed to intervene, much as the Bank of England momentarily paused its quantitative tightening programme to backstop the market in the UK.

Nevertheless, a market in which the Fed is frequently forced to interfere does not transmit the stability and security on which investors worldwide rely.