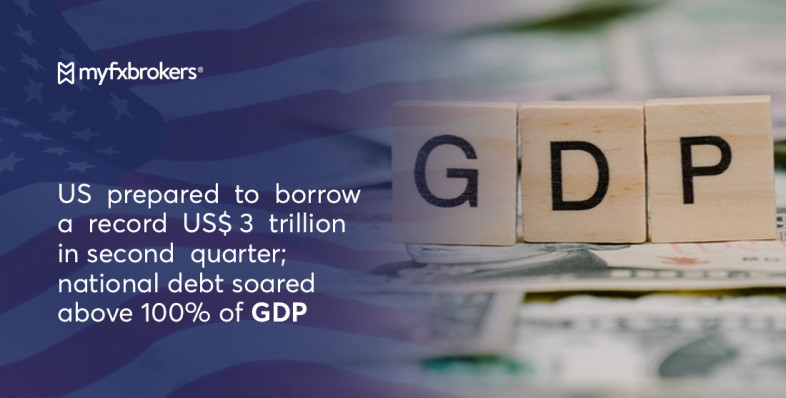 US prepared to borrow a record US$ 3 trillion in the second quarter; national debt soared above 100% of GDP

The United States has stated that it plans to borrow a record US$ 3 trillion in the second quarter in order to fund coronavirus-related relief efforts. The amount is more than five times the previous quarterly record, which was set at the height of the financial crisis in 2008.

The amount is more than five times the previous quarterly record, which was set at the height of the 2008 financial crisis.

The country borrowed $1.28 trillion in 2019. The US has approved approximately $3 trillion in virus-related relief, including health funding and direct payments.

The total US government debt is now approaching $25 trillion.

Further assistance is being discussed, though some Republicans are concerned about the impact of increased spending on the country’s rapidly rising national debt.

The Federal Reserve used its emergency powers to advance funds to major financial institutions. It also made it easier for foreign central banks to convert their own currencies into dollars via so-called "swap lines”.

The US Treasury is supporting the programmes with $85 billion, indicating that, unlike most of its actions in 2008, the Fed is concerned about losses. However, the Fed has gone beyond simply bolstering the financial system.

Fearing a wave of bankruptcies as shutdowns eat into company budgets and fearful banks refuse to lend, the Fed announced in March that it would work directly with large corporations on loans and bond offerings.Others have expressed concern that the bank’s actions may encourage future risky borrowing.

The Fed is also directly lending to small businesses.

The Fed announced its own “Main Street” lending operation, allocating up to $600 billion to fund low-cost four-year loans ranging from $1 million to $25 million for mid-sized businesses – something it has never done before. The Treasury Department has committed $75 billion to the plans, which were announced after the government’s small business assistance programme was overwhelmed.

The rising costs of healthcare and social programmes, combined with falling tax revenue, have created enormous challenges for local governments. They could normally borrow money by issuing bonds. However, that market froze earlier this year, as the magnitude of the crisis made investors wary of repayment.

As a result, the Fed announced that it would purchase up to $500 billion in new bonds issued by states, cities, and counties of a certain size, something it has never done before. The Treasury Department is contributing $35 billion to the effort.

In recent weeks, the Federal Reserve has purchased more than $1 trillion in treasuries as part of its own relief efforts.

Foreign investors have historically been significant holders of US debt, with Japan, China, and the United Kingdom leading the pack as of February.

For the time being, continued low rates indicate that investor appetite for US debt remains, allowing for an increase in borrowing, according to Alan Blinder, a Princeton University professor of economics and public affairs, who spoke to the BBC last month.

“So far, the answer has been everything is fine, as to how much borrowing the United States government can do before investors start to feel satiated with US debt,” he said. “But there is a legitimate question.”